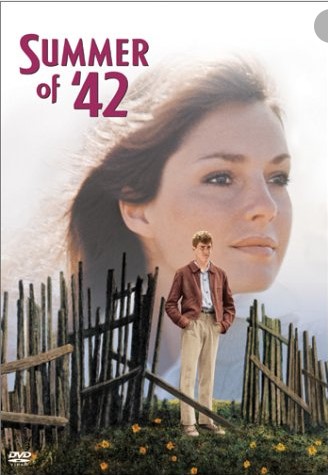 Summer of ’42 is a 1971 American coming-of-age film based on the memoirs of screenwriter Herman “Hermie” Raucher. It tells the story of how Raucher, in his early teens on his 1942 summer vacation on Nantucket Island (off the coast of Cape Cod), embarks on a one-sided romance with a young woman, Dorothy, whose husband has gone off to fight in World War II.
The film was directed by Robert Mulligan, and starred Gary Grimes as Hermie, Jerry Houser as his best friend Oscy, Oliver Conant as their nerdy young friend Benjie, and Jennifer O’Neill, as the mysterious woman with whom Hermie becomes involved. In supporting roles, Katherine Allentuck and Christopher Norris are a pair of girls whom Hermie and Oscy attempt to seduce. Mulligan also has an uncredited narrator role, as the voice of the adult Hermie. Maureen Stapleton (Allentuck’s mother) also appears in a small, uncredited voice role.
Raucher’s novelization of his screenplay of the same name was released prior to the film’s release and became a runaway bestseller, to the point that audiences lost sight of the fact that the book was based on the film and not vice versa. Though a pop culture phenomenon in the first half of the 1970s, the novelization went out of print and slipped into obscurity throughout the next two decades until a Broadway adaptation in 2001 brought it back into the public light and prompted Barnes & Noble to acquire the publishing rights to the book. The film was followed by a sequel, Class of ’44, also written by Raucher, with lead actors Grimes, Houser, and Conant reprising their roles.
Movie starts at 6:00 pm – Free Admission – Donations are accepted.
Please check the Soper Reese Theatre Covid Policy prior to coming to the theater.
Movie Sponsored By:  Classic Film Fans