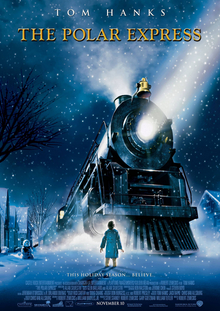 The Lakeport Main Street Association, Management Connections and the Soper Reese Theatre bring Polar Express during the Holiday Season to the children of Lakeport.  Dress up in your PJ’s and join us to see this wonderful movie on the big screen FREE OF CHARGE (donations will be accepted)!

On the night of Christmas Eve, a steam locomotive passenger train known as the Polar Express stops at the house of a boy who is growing skeptical about the existence of Santa Claus. The conductor says the train is traveling to the North Pole, and the boy, although reluctant at first, climbs aboard and meets a spirited girl and a smart know-it-all. The train then stops to pick up a boy named Billy. At first, Billy refuses to board, but he changes his mind, prompting the boy to apply the emergency brake, allowing Billy to board. The children are served hot chocolate by a team of singing and dancing waiters, and the girl saves a cup for Billy, who chooses to sit alone in the observation car. The conductor and the girl go to give Billy his cup, but the boy notices that the girl’s ticket has not yet been validated. When he tries to take it to the girl, the wind takes the ticket to the wilderness where wolves roam and an eagle who brings it to its chick, but it soon finds its way back into the train; after the girl discovers that her ticket is missing (although the boy offers his ticket, the conductor does not allow this), the conductor leaves with the girl, presumably to throw her off. Before the boy can stop the train again, he finds the ticket and traverses the rooftops of the train to find the girl.

The hero boy encounters a mysterious ghostly hobo that takes him to the engine, where the girl has been put in charge since the driver and fireman, Smokey and Steamer, are busy replacing the headlight. After the light is replaced, they are forced to stop the train when they see a herd of caribou blocking the tracks. The conductor yanks on Smokey’s beard, causing Smokey to scream out in pain, and the caribou clears the tracks. As the train continues on, it moves at an extreme speed due to the cotter pin shearing off, and the train starts rocketing down Glacier Gulch. Once they reach a frozen lake, Smokey uses his hair pin to replace the new cotter pin and Steamer narrowly gets the train onto the tracks on the other side of the lake after the ice breaks.

Once the hero boy and the girl are safe, the conductor takes them back to their seats. They go through an abandoned coach full of thrown away toys where the hobo uses a marionette puppet of Ebenezer Scrooge to scare the boy, calling him a “doubter.” They soon find Billy singing to himself at the end of the caboose. The train arrives at the North Pole, where the conductor announces that one of the children will be chosen to receive the first gift of Christmas from Santa himself. Seeing Billy still alone in the observation car, the girl and boy persuade him to join them. However, the boy accidentally uncouples the car, sending it hurtling along a route towards a sewer railway turntable inside Santa’s workshop. The children make their way through an elf command center and a gift-sorting office facility, where Billy finds a present in his name, before sliding down a massive slide into a funnel and being dumped into a giant sack of presents, where they also find the know-it-all kid. After the sack is loaded onto Santa’s sleigh, the elves escort them out before Santa and his reindeer arrive.

A bell flies loose from the galloping reindeer’s reins; the boy initially cannot hear it ring, until he finds it within himself to believe. He returns the bell to Santa, who selects him to receive the first gift of Christmas. Santa agrees to let him keep the bell, and the boy places it in his robe pocket. The rear car is returned to the train by the elves as the children board to go back home, but the boy discovers that he lost the bell through a hole in his pocket he unintentionally ripped while getting out of bed. As soon as Billy heads home, his present is waiting for him inside the house. Hero Boy returns home, and the conductor reminds him that “it doesn’t matter where you’re going. What matters is deciding to get on.” And wishes him a Merry Christmas. He awakens on Christmas morning to find a present containing his lost bell with a note from Santa. He and his younger sister Sarah joyfully ring the bell, but their parents do not hear the bell since they don’t believe in Santa and decide that the bell is broken. The boy reflects on his friends and sister eventually growing deaf to the bell over the years as their belief faded. However, despite the fact he is now an adult, the bell still rings for him, as it does “for all who truly believe”.