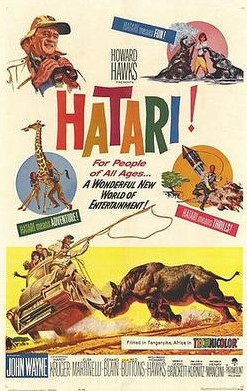 “Hatari!” is a 1962 American adventure romantic comedy film starring John Wayne as the leader of a group of professional game catchers in Africa.[2] Directed by Howard Hawks, it was shot in Technicolor and filmed on location in northern Tanganyika (in what is now Tanzania). The film includes dramatic wildlife chases and the scenic backdrop of Mount Meru, a dormant volcano.

At the 35th Academy Awards, Russell Harlan was nominated for Best Color Cinematography for his work on Hatari!, but the award went to Freddie Young for his work on Lawrence of Arabia.

Sponsored by :  Rick and Sandy Orwig