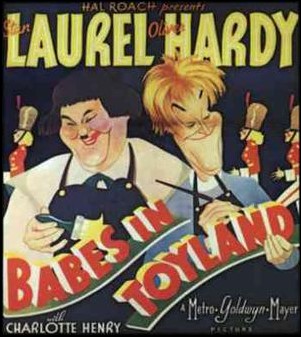 Babes in Toyland is a Laurel and Hardy musical Christmas film released on November 30, 1934. The film is also known by the alternative titles Laurel and Hardy in Toyland, Revenge Is Sweet (the 1948 European reissue title), and March of the Wooden Soldiers (in the United States), a 73-minute abridged version.

Based on Victor Herbert‘s popular 1903 operetta Babes in Toyland,[2] the film was produced by Hal Roach, directed by Gus Meins and Charles Rogers,[3] and distributed by Metro-Goldwyn-Mayer. The film was originally printed in Sepiatone, but there are two computer-colorized versions.[4]

Although the 1934 film makes use of many of the characters in the original play, as well as several of the songs, the plot is almost completely unlike that of the original stage production. In contrast to the stage version, the film’s story takes place entirely in Toyland, which is inhabited by Mother Goose (Virginia Karns) and other well-known fairy tale characters.